This area was platted in February of 1881 for B.F. Sikes as the beginning of the town of Rogers. This building once housed a restaurant and saloon. Because of its close proximity to the depot, business was good. In 1910 it was the Rogers Commission Company, a wholesale fruit and vegetable dealer which had a banana-ripening room and employed four celery cleaners. The northern end housed the German American Realty Company.

From 1954 until 1973, 318 South First Street was owned by the First Baptist Church. In 1973, the church sold the lot and building to the Rogers Boy’s Club of America, which occupied the building until 1977. Between 1978 and 1982, Terrace Furniture and Woodworking, owned by T.L. Narbett and his wife K.K., occupied the building. In 1982, the Narbetts sold the property to the Office of Human Concern which operated a thrift store in the building. A fire in the 1980s gutted the building and killed one man, Floyd Junior Ritchey. After rebuilding the store re-opened on April 9, 1986.

By 1996, 318 South First Street had become Top Bridal Outlet, for formal and wedding attire. In 2000 the name was changed to Today’s Bride. In July 2006, it became the home of Julie Wait Designs.

Pictured to the right: Rogers Commission Company in 1911, courtesy of the Rogers Historical Museum. 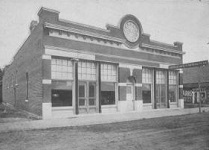